AMD is the most prevalent retinal disease in the Western world, with approximately 1-3% of the total population suffering from an advanced stage of the disease.

This disease is caused by age-related degenerative changes within the macula, which is the retina’s central portion.

The retina is a highly specialized neurosensory tissue that constitutes the innermost layer of the back of the eye. The retina receives the visual input we see and transfers it to the brain via the optic nerve for image processing and interpretation.

The macula is the retina’s central portion and responsible for the sharp, focused vision that we need in our daily activities such as reading, driving, recognizing faces and colors, and seeing objects in fine details. There are two main types of AMD, known as the dry type (atrophic), which is more common, and wet type (exudative).

Wet macular degeneration is less common and usually occurs as a sequala of the dry type. The rate of disease progression can vary among individuals, and studies have identified several risk factors for faster disease progression.

Potential benefits of identifying these risk factors include the ability to predict disease progression in individual patients and improve clinical trial design.

As mentioned above, there are two major types of AMD, known as the dry type (atrophic-non neovascular) and the wet type (exudative- neovascular). Dry macular degeneration is more common and accounts for 80 to 90 % of all cases of AMD.

The hallmark of dry AMD is the progressive accumulation of yellowish deposits called drusen under the retina. One could think of drusen as the biochemical waste products of retinal metabolism. The normal retina is capable of discarding and recycling drusen through different biochemical pathways.

In people with dry AMD, these biochemical pathways are dysfunctional, resulting in the buildup of drusen with damage to the retina’s light-sensing cells. Consequently, patients start to complain of central vision distortion/loss that worsens slowly over time.

In 10 to 15 % of affected individuals, the progressive accumulation of drusen induces abnormal growth of fragile blood vessels from a thick vascular layer underneath the retina, known as the choroid. These abnormal blood vessels are called choroidal neovessels (CNV), which is the hallmark of conversion from dry to wet AMD.

As the name suggests, the wet form is characterized by leakage of blood, lipids, and fluid from these abnormal blood vessels underneath the macula. This results in severe vision loss that can progress rapidly. The current treatment modality for wet AMD is injecting the eye with medications capable of inducing regression of these abnormal vessels.

Based on the size and amount of drusen found under the retina during an eye examination, dry AMD can be staged into early, intermediate, and advanced. It should be noted that wet AMD is always considered as an advanced stage of AMD. It is also possible that you might have AMD in one eye only or have different stages or types of AMD in each eye.

Because most people do not have vision complaints in early AMD, this stage is usually discovered incidentally during a routine eye exam. Regular eye exams are essential as eye doctors can detect drusen long before symptoms appear.

In early AMD, there is usually no vision loss. It is diagnosed by the presence of small-sized drusen (the yellow deposits beneath the retina) or a few intermediate-sized drusen. Based on the examination findings, your eye doctor may advise you to have frequent eye exams to monitor for new signs or symptoms that could indicate macular degeneration progression.

Even if you have no symptoms, it is crucial to follow the eye doctor’s recommendations regarding the regularity of eye exams once the early stage of AMD has been identified.

This stage is important to diagnose because patients with intermediate AMD are at higher risk for developing advanced AMD. At this stage, the drusen get larger and increase in number.

This stage is diagnosed by the presence of multiple medium-sized drusen, or at least one large drusen, in one or both eyes, along with changes in the retinal pigment epithelium (RPE), which are cells underneath the retina that support the health, nutrition, and metabolism of the retinal photoreceptors. Patients might still be asymptomatic or start to complain of vision changes such as the need for brighter light for reading and doing close work and difficulty adjusting from bright to dim light conditions.

At this stage, progressive accumulation and increased size of drusen cause irreversible damage, and atrophy of the photoreceptors (light-sensing cells) in the eye’s back, resulting in severe vision loss. Moreover, degeneration of the retina’s underlying supportive tissue, retinal pigment epithelium -RPE, increases the severity of the visual loss.

Vision loss starts with a distorted or a blurred spot in the center of your vision that gets larger and darker over time, occupying most of your central vision. Patients may no longer be able to recognize faces, and although they may still have peripheral (side) vision, they may be considered legally blind.

As the disease progresses, patches of the macula waste away (atrophy), resulting in a particular type of retinal atrophy called ”Geographic Atrophy” (GA). The name “Geographical Atrophy “originated from the resemblance of these atrophic patches of macular areas to countries on a map. GA is considered the most advanced form of dry AMD.

While dry AMD is classified into early, intermediate and advanced, wet (exudative-neovascular ) AMD is always considered advanced. This type of AMD’s characteristic feature is the development of abnormal blood vessels underneath and/or within the retina, which can be damaging if they leak fluid or blood.

While the effects of dry AMD can be more slow and gradual, the course of wet AMD can progress quickly, and vision loss can be sudden if there is leakage or bleeding underneath or into the retina. It is also possible to have characteristics of both wet and dry AMD in the same eye.

Progression of AMD- How quickly does it progress?

The rate and risk for progression of AMD vary according to the stage of AMD. With early AMD, there is a low risk of progressing to advanced AMD within the next 5 years.

Even after 10 years, one study found that only 15% of people with no drusen or small drusen at diagnosis went on to develop large drusen, which carry a higher risk for progression.

In one of the landmark studies on AMD, intermediate AMD progression to advanced AMD at 5 years was approximately 18%. It was also found that there is a 6.3% chance of developing advanced-stage AMD (with vision loss) within five years of diagnosis in patients with intermediate-stage AMD who have large drusen in one eye.

Moreover, if the large drusen are present in both eyes, the likeliness of developing late-stage AMD increases to 26% within 5 years. Additionally, it was found that approximately 37% of patients with intermediate-stage of AMD with medium drusen in one eye went on to develop large drusen, and 71% of those who had medium drusen in both eyes baseline developed large drusen at the 10-year follow-up. Also, having advanced AMD in one eye increases your risk of developing advanced AMD in the other eye to 35-50%.

How long does it take to lose vision with macular degeneration?

In 2005, a simplified severity scale was developed for ophthalmologists to assess AMD risk progression that is based on two primary ophthalmoscopic features: one or more large drusen and the presence of pigmentary changes.

Patients who are affected are assigned 1 point for each risk factor present; then, the points are added together for both eyes, resulting in a 5-step grading scale (0-4). The doctor can then provide an approximate 5-year and 10-year risk of developing advanced AMD.

Interestingly, an online AMD risk calculator that includes phenotype (simplified severity scale score described above) and demographic information (age, smoking, and family history of AMD) had excellent calibration and overall performance, whereas the addition of specific genetic analysis added little to the 9- to the 10-year trend for the development of advanced AMD. ( You can find the online AMD risk calculator at this website: http://caseyamdcalc.ohsu.edu/)

Does AMD Necessarily Lead to Blindness?

The most severe form of AMD will damage central vision only. Central vision comes from the macula, the center of the retina at the back of the eye.

The macula comprises less than 5% of the total retina, but it is responsible for about 35% of the visual field. That means an affected individual will find it difficult or impossible to read, drive, do fine tasks, or recognize faces.

However, the peripheral vision is usually left intact, so macular degeneration does not usually lead to total blindness. Many affected people move about with no assistance at all and lead independent and productive lives.

What can you do?

While scientists are still trying to fully understand AMD’s mechanisms, it is now well known that AMD develops due to the interplay between genetic, immunological, environmental, and lifestyle factors.

While we have no control over our genetic, immunological, and most environmental factors, it is still possible to control the known lifestyle risk factors that could worsen AMD. Multiple studies showed that a healthy lifestyle plays a vital role in reducing the risk and/or slowing AMD progression.

Many things can be done to curb AMD progression once you are initially diagnosed with early AMD. These include:

Patients with intermediate AMD have a higher risk for progression to advanced AMD. At this stage, your ophthalmologist can prescribe special vitamin supplements called AREDS2 formula, based on the AREDS2 (Age-Related Eye Disease Study 2) study.

This large clinical trial investigated the role of certain vitamin supplements on AMD progression. This study showed that AREDS2 formula could reduce the risk of progression from intermediate to advanced AMD.

Also, in people who have significant loss of vision in one eye due to dry AMD, these supplements might reduce the risk of central vision loss in the less affected eye. AREDS2 formula comprises zinc, copper, vitamin C, vitamin E, Lutein, and Zeaxanthin.

It should be pointed out that AREDS 2 supplements are not a cure or prophylaxis for dry AMD, but they may help to slow the disease progression in some people who meet certain criteria determined by your eye doctor.

Advanced AMD can be either dry type or wet type. While there are several treatment options for wet AMD, there is currently no treatment available for advanced dry AMD. Essential steps to take after a diagnosis of late-stage AMD include:

Among senior citizens, macular degeneration is considered the leading cause of permanent vision loss, affecting more than 10 million Americans – more than cataracts and glaucoma combined.

This can result in progressive symptoms such as dark and blurry vision, which can significantly impact your day to day life.

Clear Vision contains a combination 14 of the most powerful, most effective nutrients to protect your eyes and safeguard your vision.

It works to lower your risk of developing age-related macular degeneration and slows the progression of macular diseases.

Clear Vision contains six nutrients which have been recommended by the National Eye Institute to help reduce the risk of developing age-related Macular Degeneration (AMD).

These key ingredients are highly bioavailable, meaning your body absorbs all of the compounds quickly.

AMD is a significant cause of vision loss in the elderly population all over the world. However, the timeline to sight loss varies significantly between patients and is dependent on many factors.

Implementing a healthy lifestyle is the only modifiable factor that could slow the progression of AMD. Even in the advanced stages of AMD, total blindness usually does not occur. With your eye doctor and vision rehabilitation team’s help, maximizing your residual visual functions is possible, which can help you perform your essential daily activities independently. 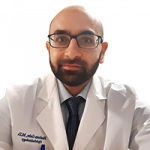