Acid reflux is a common condition that affects many of us at some point in our lives.

The fact that it is common does not mean it is easy to deal with.

Anyone that has experienced that burning sensation behind the breastbone knows that acid reflux is no joke.

If you experience this uncomfortable feeling frequently and have been wondering how to get rid of acid reflux, this article is for you.

We tell you everything you need to know about acid reflux, including its symptoms, triggers, and some of the best ways to get rid of it.

What is acid reflux?

The term acid reflux describes a situation in which stomach acid moves back up into the esophagus and causes irritation.

Usually, food passes from your mouth to your stomach through a tube called the esophagus. Your stomach contains acid, which helps to break down food particles before they move on to other parts of your digestive tract.

There is a valve known as the lower esophageal sphincter (LES) that is located between the lower end of your esophagus and the upper part of your stomach.

The LES relaxes and opens up when you swallow food, allowing food to move into your stomach. It normally closes after you stop eating to protect the esophagus from stomach acid.

When the LES fails to close properly after you eat, stomach acid can move up to the esophagus and irritate it. This is referred to as acid reflux.

Acid reflux is common and affects most people once in a while. However, having persistent acid reflux that interrupts your daily routine may mean that you have a chronic condition called gastroesophageal reflux disease (GERD).

The most common symptom of acid reflux and GERD is a burning sensation in the chest, which is often referred to as heartburn.

This usually occurs after eating. It may be worse at night, when you lie down flat and when you bend forward.

Other symptoms of acid reflux/GERD include:

Long-standing exposure to stomach acid can cause changes to the inner lining of your esophagus (Barett’s esophagus) and increase your risk of developing esophageal cancer.

Certain foods, drinks, habits, and medications can trigger or aggravate acid reflux. Below we discuss some of the most common ones.

Foods to avoid with reflux

Fatty foods take longer to digest than other foods, and they can cause your stomach to secrete more acid.

Worse still, when fatty foods enter the stomach, they stimulate the release of a hormone called cholecystokinin (CCK).

CCK has a relaxing effect on the LES, which increases the risk of the excess acid moving up into your esophagus.

Foods that have a high level of natural acid can worsen the symptoms of GERD. This is because they can irritate the lining of your esophagus, especially when they are eaten excessively or on an empty stomach.

Spicy foods are some of the most common triggers of acid reflux. The likely culprit behind this is capsaicin, the chemical in most spicy foods that gives them their chilly flavor.

In one study, capsaicin was found to trigger acid reflux symptoms in 28 out of 31 participants who had GERD and 6 out of 17 healthy participants.

Capsaicin can irritate the lining of the esophagus and worsen symptoms of GERD. It may also slow digestion, causing food to sit longer in the stomach and increasing pressure against the LES.

While there is not much scientific evidence, there is a ton of anecdotal evidence showing that coffee is a common trigger of acid reflux.

Caffeinated coffee is acidic, which may worsen symptoms of GERD. Also, caffeine may have a relaxing effect on the LES.

Teas such as black, white, and green tea contain caffeine. Just like coffee does, they may exacerbate symptoms of acid reflux.

Some non-caffeinated minty teas, such as peppermint and spearmint tea, are commonly recommended as remedies for nausea.

When you drink carbonated beverages, gas is produced in your digestive tract. Excess gas increases pressure in your stomach and can push against your LES, forcing it open. Some carbonated drinks also contain caffeine.

Alcohol can cause your LES to relax. It may also increase acid secretion and cause direct damage to the esophagus, making it more vulnerable to the effect of stomach acid.

Habits that can trigger acid reflux

Having a large meal fills your stomach and increases the pressure against your LES, which could push acid back into your esophagus.

The nicotine contained in tobacco is thought to have a relaxing effect on the LES. Smoking can also cause you to cough more frequently, which increases your intra-abdominal pressure. This may push acid up to your esophagus.

Lying down soon after eating

Gravity can reduce the pressure in your stomach and help your stomach empty faster by basically pulling food downwards after you eat.

When you lie down flat after eating, this effect of gravity is lost, and food has a higher chance of flowing back into your esophagus.

Clothes that fit tightly around your abdomen can increase the pressure on your stomach and push acid upwards, especially if worn immediately after eating or drinking.

Drugs that can make heartburn worse

Certain medications can trigger or worsen acid reflux by irritating the esophagus, relaxing the LES, or increasing acid secretion.

How to get rid of acid reflux: 10 tips

If you want relief from acid reflux, you must make efforts to identify your triggers. There are also lifestyle changes that can help you keep reflux at bay. We discuss all of these below.

Everybody has different triggers, and each person is affected by various foods differently. To help you create an acid reflux diet, here’s a list of some of the most common trigger foods to avoid:

The above list is meant to give you a general idea of the most common triggers. The best way to identify your specific triggers is to start a food/symptom journal.

Write down what you eat, including the time, and record whether or not you have symptoms afterward. Doing this can help you discover patterns and pinpoint the foods that trigger your heartburn.

If you discover that fatty foods are your triggers, cut down on them and try alternatives. For instance, instead of a high-fat steak, you can go for proteins with a lower-fat content, like chicken. Or, you can replace French fries with baked potatoes.

If you find out that you get that burning sensation every time you eat acidic foods, but you do not want to give them up entirely, avoid eating them on an empty stomach and try cutting down your meal portions.

If spicy foods are a trigger for you, try to cut down on the spices and see how your body responds.

2. Cut down on trigger drinks and alcohol

The same principle of using a food journal applies to drinks and even behaviors. You can use a journal to discover whether or not certain drinks trigger acid reflux for you.

If you find that caffeine is one of your triggers, try cutting back on how much tea and coffee you drink daily. You can also try decaf coffee or herbal teas (apart from minty ones) that are caffeine free.

Also, try to reduce your alcohol intake. Drinking limited amounts of alcohol typically will not cause symptoms, but excessive drinking most likely will. It is also best to avoid carbonated beverages.

To avoid creating a lot of pressure in your stomach, reduce your meal portions. You can also try eating several small meals throughout the day instead of the typical three large meals a day.

5. Avoid lying down soon after eating

If you are struggling with acid reflux, you need the extra help that gravity offers when it comes to faster gastric emptying.

Avoid lying down for at least three hours after a meal. Instead, try to sit upright, stand, or take a walk.

6. Raise the head of your bed and change your sleeping position

Studies have shown that elevating your head instead of lying flat while you sleep can help reduce heartburn.

To do this, you can place a foam wedge under your mattress or use wood blocks to raise your bedpost.

You can also try changing your sleeping position. Some studies have shown that sleeping on your left side instead of your right may help improve symptoms of acid reflux.

With acid reflux, it is best to wear free clothes that do not constrict your midriff, especially after eating and when you’re going to bed.

If you are suffering from acid reflux and you’re taking a medication that might be triggering or worsening it, speak to your doctor about possible alternatives.

If you are a smoker, quitting smoking may be the main step necessary to get rid of acid reflux. Getting rid of the effect of nicotine on your digestive tract may result in you having symptoms less often or not at all.

Be sure to use only sugar-free gum to reduce your risk of dental caries.

Acid reflux is a common and very uncomfortable condition that affects many of us during our lives. When acid reflux is persistent, it may mean you have GERD.

While it is not life-threatening, GERD can cause changes in the esophagus and increase your risk of esophageal cancer.

Identifying and avoiding triggers is one of the best ways to get rid of reflux. And keeping a food journal is the most effective way to identify your triggers.

If symptoms persist or worsen despite avoiding your triggers and making recommended lifestyle modifications, you should see a doctor. 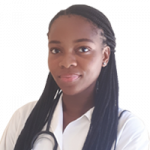 Dr. Alex obtained her medical degree from the University of the Gambia, School of Medicine and Allied Health Sciences. She was awarded the best graduating medical student of her year and was the youngest graduating medical doctor from the university. Dr. Alex currently practices medicine at Edward Francis Small Teaching Hospital.