Age-related macular degeneration (AMD) is the leading cause of legal adult blindness and severe visual impairment in developed countries.1

While once of the most common, there are other common causes of visual impairment in older adults is presbyopia, cataract, glaucoma, and diabetic retinopathy.2-4

Visual impairment by macular degeneration is a major health problem for older adults. Its impact on functional status and quality of life is quite remarkable.

Visual impairment caused by macular degeneration can limit the ability of older adults to ambulate, serve themselves, safely drive a car and is associated with increased rates of falls and hip fractures.5-7

What is macular degeneration?

Age-related macular degeneration (AMD) is a degenerative disease of the centermost part of the retina known as the “macula.” The disease results in loss of central vision, which is the sharpest vision humans have.

AMD is clinically classified as dry or wet, depending on the pathological stage. It was the general understanding in the past that dry AMD and wet AMD are two separate diseases.

However, it is well known nowadays that dry AMD progresses to wet AMD as a complication of the disease in some patients. The risk of developing wet AMD was estimated to be 1 to 5% every year and 13 to 18% every three years.8 That being said, it is important to understand that wet AMD accounts for more than 80% of cases of severe vision loss or legal blindness.9

In the early stages of age-related macular degeneration, patients are often asymptomatic. Patients with dry AMD may complain of a gradual loss of vision in one or both eyes.

So far, it is still unclear what the real pathogenesis of age-related macular degeneration is. There has been some evidence related to abnormal components in the retinal pigment epithelium. Also, theories related to inflammation and ischemia were proposed in several studies as potential contributors to the pathogenesis.11-12

Specific genes have also been identified that could account for more than half of all cases of AMD. It was found that these factors influence the development and progression of the disease and different responses to treatments.13

Hypoxia and ischemia have also been significant contributors, becoming a specific target for therapeutic management options, including smoking cessation and antioxidants.

Researchers have identified numerous risk factors for age-related macular degeneration.14 These include the following:

While the most common and essential complication to avoid and focus on is bleeding from choroidal neovascularization, wet macular degeneration is associated with other complications. These include visual hallucinations (Charles Bonnet syndrome).15

It can also lead to retinal detachment, where the retinal tissue separates from the blood vessels. This can cause the sudden appearance of floaters, flashes, and reduced peripheral vision.

When vision loss is substantial, it can commonly lead to depression, social isolation, and low self-esteem. It can also lead to a high risk of falling, particularly for seniors who already have full risks based on their medications or balance problems.

The relationship between diet and the risk of AMD has been analyzed in several research studies.16-18 Healthy diets, particularly those high in carotenoids, lutein, zeaxanthin, and zinc, have been associated with decreased risk of AMD.

Nutritional and vitamin supplements, including antioxidant vitamins, do not appear to be effective in preventing AMD. However, vitamin B preparations were shown to reduce the risk of developing AMD.20

Physical activity appears to have a protective effect, as well. In multiple studies, higher levels of physical activity were associated with a lower likelihood of developing early AMD.21

Smoking was shown to increase the risk of developing dry and wet AMD. We always discourage all patients from quitting smoking or avoiding initiating smoking. While it may seem surprising to many people, this also includes vaping with nicotine-containing products, as nicotine may exacerbate neovascularization. 22

As a general rule, all patients should quit or avoid initiating smoking due to the increased risk of progression to advanced age-related macular degeneration (wet AMD).

It is also recommended that patients with risk factors evident on optical coherence tomography and other imaging modalities to be treated with a daily oral eye vitamin supplement (for example, Ocuvite, PreserVision).

Doses should be consistent with age-related eye disease study-2 (AREDS-2) formulation (containing 500 mg of vitamin C, 400 international units of vitamin E, 10 mg of lutein, 2 mg of Zeaxanthin, 80 mg of zinc [as zinc oxide], and 2 mg of copper [as cupric oxide]. In the original AREDS formulation, one of the components also was beta-carotene, which has been associated with an increased risk of lung cancer, particularly in smokers.

Non-smokers and the other is at low risk of lung cancer may still use the original formulation, if available. Antioxidants have been hypothesized to prevent cellular damage in the retina by limiting the effects of free radicals produced in the process of light absorption.23

Normal people with no AMD or patients with mild or borderline AMD have not been shown to benefit from antioxidant and/or zinc supplementation.

It was also studied whether adding additional antioxidants would further decrease AMD’s risk, but other additions did not reduce the progression of early AMD.

When it comes to wet age-related macular degeneration, special considerations are given. Effective therapies for wet AMD include intravitreous injection of a vascular endothelial growth factor (VEGF) inhibitor, also known as “anti-VEGF,” photodynamic therapy (PDT), and supplementation with zinc and antioxidant vitamins.

The decision about specific therapies must take into consideration the likelihood of visual recovery, which is better with smaller, more recent lesions, as well as the risks of the various therapies. This decision must be taken by an ophthalmologist and particularly a retina specialist. 24

Generally speaking, the current guidelines recommend for most patients with wet AMD to receive treatment with intravitreal bevacizumab, ranibizumab, or aflibercept. Photodynamic therapy (PDT) is no longer offered to patients.

It is also suggested that patients with wet AMD in one or both eyes be treated with daily oral supplements consistent with the AREDS-2 formulation that we already mentioned. Alternatively, patients who are non-smokers or former smokers may use the standard AREDS formulation, which contains beta-carotene rather than lutein or zeaxanthin.

Clear Vision is one of the leading all-natural, clinical-grade supplements, designed to work as part of a healthy diet and lifestyle to maintain optimal eye health.

It contains six nutrients that have been recommended by the National Eye Institute to help reduce the risk of developing age-related Macular Degeneration (AMD).

In addition to this, the ingredients in Clear Vision are clinically proven to support optimal eye health, improve vision sharpness, combat age-related vision loss, and protect against cataracts.

Find out more about Clear Vision.

Age-related macular degeneration (AMD) is the leading cause of blindness in adults of developed countries. It affects the central portion of the retina that results primarily in loss of central vision. AMD is classified as dry or wet, depending on the stage.

The risk of AMD increases with age. Smoking has been identified as a major modifiable risk factor. Symptoms of wet AMD usually appear in one eye even though the disease does affect both eyes. When a patient presents with a visual disturbance complaint, they require urgent ophthalmic evaluation by a board-certified ophthalmologist, preferably a retina specialist. Treatment options include antioxidant agents as well as anti-VEGF injections. 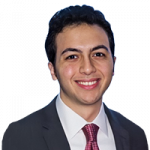